Defence Minister Harjit Singh along with BC MPs Sukh Dhaliwal and Randeep Sarai.

AS part of this year’s celebration of the 40th anniversary of the successful private sponsorship refugee program, the federal government on Tuesday welcomed the first arrival of Sikh and Hindu minority refugee families from Afghanistan which was possible through the generosity of Canadians coming together to help resettle these vulnerable refugees.

Defence Minister Harjit Sajjan greeted the first privately-sponsored families from among the approved Afghan minority refugee claimants after their arrival in Calgary.
He noted that Canada is a global leader in resettling the world’s most vulnerable, which is why the federal government has worked very closely with the Manmeet Singh Bhullar Foundation and other partners to ensure safe resettlement opportunities in Canada.
Manmeet Singh Bhullar was a member of the Legislative Assembly of Alberta who was known for his compassion and support for his community. Unfortunately, he tragically lost his life while helping a stranded motorist, but his legacy continues to positively affect those in Canada and around the world. His advocacy was instrumental in starting this process to assist the vulnerable Sikh and Hindu minorities in Afghanistan. 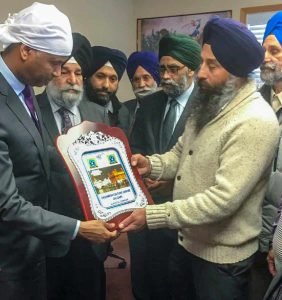 The private sponsorship of refugees program has helped resettle thousands of the world’s most vulnerable. The arrival of these refugees is an example of why this program is now being emulated by countries around the world. This program is built on the generosity of Canadians and will continue to help resettle those most in need, Sajjan noted.

He added: “Our government has taken action to ensure the safety of survivors of persecution and violence in Afghanistan. Families from among the Afghan Sikh and Hindu minority population have faced extreme risk based on their ethnicity and religious beliefs. We are proud to honour the legacy of my good friend Manmeet Singh Bhullar by welcoming members of this vulnerable population to Canada to offer them a new life and home, while ensuring they have the support they need to thrive.”
The Manmeet Singh Bhullar Foundation said: “Today marks an important step in fulfilling Manmeet’s vision for this project. We hope to continue welcoming other families as they complete the private sponsorship journey. Minister Sajjan’s stalwart leadership, assistance from the Government of Canada, bi-partisan support, and the sheer will of community members throughout Canada to share in this work; brings us to this point. These families can now move from not only surviving, but thriving while living the Canadian dream.”

MEANWHILE, the World Sikh Organization of Canada said it was delighted to welcome the arrival of the first Sikh and Hindu refugee families from Afghanistan to Canada.  It said Tuesday’s arrivals were the result of the tireless work of Manmeet Singh Bhullar who championed this cause prior to his tragic passing in November 2015.

The arriving refugees have been sponsored through private applications that were spearheaded by the Manmeet Singh Bhullar Foundation with support from the World Sikh Organization of Canada, community groups and individuals carrying on the tireless work of Bhullar. By utilizing the private sponsorship stream, individuals donate the costs of refugee sponsorship, maintaining legal responsibility to ensure settlement supports are provided to refugees.

Sikhs and Hindus have endured increasing religious persecution and today face a difficult, if not unlivable situation in many parts of Afghanistan.  The Sikh and Hindu communities that have lived in Afghanistan for hundreds of years, now number less than 1,000 individuals.  Prior to 1992, their population numbered over 200,000, however due to persecution and discrimination, most have been forced to flee to other countries.  The Afghan Sikh and Hindus remaining in Afghanistan are the most vulnerable who do not have the resources or ability to relocate.

In December 2014, Sikh and Hindu families from Afghanistan’s Helmand region reached out to the WSO for help.  In turn the WSO asked Bhullar for his assistance.  Bhulla began what seemed like the impossible task of helping these families on the other side of the world, in what was and continues to be an extremely dangerous region.  He single-handedly oversaw the safe exit of each Sikh and Hindu family from Helmand to India and helped find local organizations to assist with their basic needs.  As refugees in India have no legal status, receive no government assistance and often live in poverty, Bhullar strongly advocated for steps to help bring these families to Canada.

After Bhullar’s tragic passing in November 2015, the Manmeet Singh Bhullar Foundation carried forward his work and with the assistance of gurdwaras, elected officials, the Sikh community and the WSO, we have finally seen the arrival of the first families to Canada.

WSO President Mukhbir Singh said: “The arrival of the first Afghan Sikh and Hindu families to Canada is a proud moment for our community and a tribute to the vision and efforts of Manmeet Singh Bhullar.  Manmeet saw a community in desperate need and despite the odds, found a way to help them.  The WSO is proud to have been a part of the team that has been working on this project with Manmeet and his family since 2015.  We thank the Government of Canada for their assistance in this process and look forward to the expeditious processing of the Afghan Sikh and Hindu refugee applications still in queue. While the arrival of these first families is an important milestone that we are celebrating, we also know that there are approximately 1,000 Sikhs and Hindus in Afghanistan today in very desperate straits and who are facing severe religious persecution and continue to plead for assistance. We must ensure that urgent steps are taken to help them as well.”