Jagmeet won from Burnaby South, beating Jay Shin of the Conservatives and Neelam Brar of the Liberals. 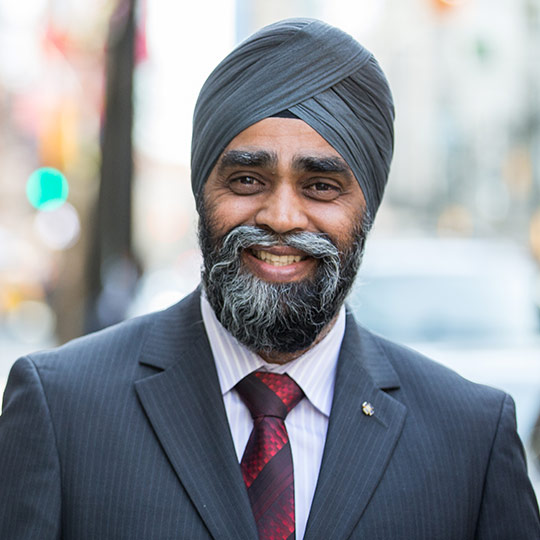 Harjit Sajjan immigrated to Canada from India with his family when he was five years old. He grew up in South Vancouver and has benefitted from everything our diverse and culturally rich community has to offer. He has lived in Vancouver for many years with his wife and two children.

He is a former detective with the Vancouver Police Department, a former Lieutenant Colonel with the British Columbia Regiment, and a long-time advocate for youth education and mentorship programs.

For 11 years, Harjit was a member of the Vancouver Police Department, based primarily in South Vancouver. He completed his career as a detective with the gang crime unit. As a member of the British Columbia Regiment (Duke of Connaught’s Own), he participated in four operational deployments—one to Bosnia and three to Afghanistan.

On October 19, 2015, Harjit was elected as Member of Parliament for Vancouver South and was appointed as Canada’s Minister of National Defence. For four years, Harjit has served Vancouver South as a strong voice – and advocate – for the community in the House of Commons, and brought valuable and informed perspectives to the table.

After earning his Bachelor of Science (Surveying Engineering) from the University of Calgary, Sukh started his own business Dhaliwal & Associates Land Surveying Inc. As a former member of the Surrey Board of Trade, he was an active spokesman for small businesses.

Through his dedication to community service, Sukh has played a vital role in transforming Surrey into one of the most dynamic and rapidly developing communities in Canada. He participated on the Board of Directors for SEEDS (Self Employment and Entrepreneur Development Society), was a member of the City of Surrey Parks and Community Services committee, and volunteered with Surrey Memorial Hospital Foundation’s Emergency Centre Campaign – a fundraising effort to assist in the construction of the hospital’s expanded emergency ward.

Sukh has lived in Surrey—Newton for the past 25 years, where he continues to raise his son Arjan with his wife Roni. Sukh’s two daughters, Keerat and Joat, are both completing medical residencies on their path to becoming physicians.

For four years Randeep Sarai has been the representative for Surrey Centre in Parliament.

Randeep often provides pro bono services to non-profit organizations and to those that cannot afford legal services. Randeep has a background in real estate development, giving him a sound understanding of transportation and infrastructure issues facing the Surrey community. He has served on the Standing Committee on Citizenship and Immigration.

Randeep founded and has served as a Director of Virsa – Supporting Youth Strengthening Families Society and helped start the South Asian Community Coalition Against Youth Violence which successfully championed for the creation of the Integrated Gang Task Force. An active volunteer for the CORSA Foundation, Randeep works with his community to help South Asian youth break the cycle of violence. He is Director with 3HO (Healthy, Happy and Holy Organization) – a network of people dedicated to living a life that uplifts and inspires.

Randeep earned his Bachelor of Arts from the University of British Columbia before completing his Bachelor of Laws at Queen’s University in Kingston, Ontario. Randeep and his wife Sarbjeet are raising their three children in Surrey, and he enjoys yoga, soccer, and jogging in his spare time.

Inspired by Pierre Elliott Trudeau’s vision for a just society, Dr. Fry immigrated to Canada in 1970, practicing family medicine at St. Paul’s Hospital for decades. She was a leader in the medical community, serving as president of the Vancouver Medical Association (VMA), BC Medical Association (BCMA), and the Federation of Medical Women. She also hosted the popular medical information show Doctor, Doctor on CBC television.

Following her election in 1993, Dr. Fry was appointed Parliamentary Secretary to the Minister of Health. From 1996 to 2002, she was in Jean Chrétien’s Cabinet as Canada’s Secretary of State for Multiculturalism and Status of Women, where she focussed on social policy, arts and culture, women’s equality, the environment, homelessness, same-sex benefits, and equal marriage.

From 2006 to 2015, she held a number of leadership roles in the Official Opposition, holding the Harper government to account as Critic for Canadian Heritage, Critic for Sport and the 2010 Games, and Critic for Health—where she was responsible for developing the Liberal Party of Canada’s 2015 Health platform.

She has three adult sons and four young grandchildren.

Previous: According to Abacus Data Liberals ahead by 2 as hung parliament is most likely outcome
Next: Cayenne Bistro and Grill: A Home for East African and Indian fusion food